Sampford Courtenay bellringers aim to ring at all St Andrew's services. Bellringing practice is on Tuesday evenings from 7.30pm. For more details, contact our Bell Captain, Joe Stoneman, on 01837 54750 or email joe.stoneman@btinternet.com.

If you are not a tower bellringer you might believe the image that advertisers promulgate of a man hanging on to a rope and being gently lifted off his feet every time the bell sounds. That is a complete misrepresentation of the ancient and complex art of tower bellringing. We need to put the record straight!

First, let’s start with the bells. Nowadays, you will find a peal of six in most churches but it is possible to encounter up to 16. Bells are usually made of bronze and can vary in weight from less than a hundredweight to several tons. In any tower, the lightest is called the ‘treble’ and the heaviest the ‘tenor’. Each bell has an axle with a large diameter wheel attached to one end and all are mounted in a strong frame rigidly fixed to the structure of the tower. A rope is attached to each bell wheel at a point offset from its top centre, when it is at rest in the downward position, so that when it is pulled it makes the bell swing. The rope drops down the tower, through floors and guides, until it appears at the floor level, where the ringers collect (the ringing chamber). The end of the rope may be a simple termination or loop, but several feet above it can be found a furry grip known as the ‘sally’.

The action of pulling on a rope to make the bell swing gently and eventually sound is known as chiming. Peal-ringing is totally different and requires the bell to be fully inverted at the end of its swing in either direction. On completion of a peal, the bell is parked upside down, a condition achieved by fixing a stay (usually a rod made from ash) to the centre of the bell axle, diametrically opposite to the open bell mouth. When the bell is upside down, the stay points downwards. If the bell travels slightly further than its zenith, the stay will make contact with a sliding bar that moves horizontally just enough to allow the bell to remain inverted or ‘rung up’. Properly adjusted, the rope should require minimal effort to pull the bell over top centre to allow a peal to be started again.

There are two rope movements involved in making a bell ring: a ‘hand stroke’ and a ‘back stroke’. The bell is normally parked on the hand stroke which, because of where the rope is fixed, has the shorter movement of the two. Ringing from treble down to tenor in numerical sequence is known as ‘rounds’. A peal, though, involves changing the sequence regularly according to a known format. There are two styles of ringing: call changing (much favoured in the West Country) and method ringing. In call changing, somebody, usually the treble ringer, shouts out which bells need to change position once the hand and back stroke for a previous call have been completed. With method ringing, the sequence for changes has to be remembered by each bell ringer and a change usually occurs on each stroke.

In call changing, the important factor is the period between the sounding of the bells, which should be unvarying at all times. With method ringing, the accuracy of the ringing period is secondary to remembering the sequence of changes in often extensive and complex peals. 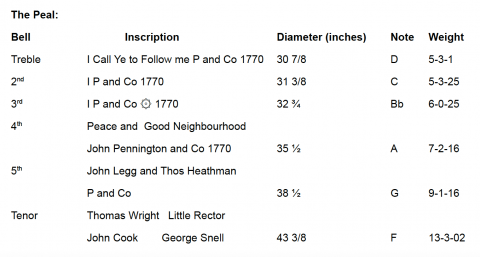 The earliest record of bells at St Andrew’s can be found in 1553, when the Inventory of Church Goods noted that there was a peal of four. A new peal of six was founded in 1770 by Penningtons, a bell manufacturer and installer with premises in Devon and Cornwall. It is thought that Penningtons would probably have cast the peal in Sampford Courtenay and, since the furnace and pit were available, taken the opportunity to cast bells for other towers in the area at the same time.

By 1905, the original bell frame had become unfit for purpose and was replaced by the much-lauded Harry Stokes of Woodbury, near Exeter. The new frame was made of oak and was a particularly fine piece of craftsmanship, which survives to this day. At the same time, it was decided to replace the tenor bell, possibly because it was cracked. Taylors of Loughborough provided the bell, which was tuned using a new technique which they had perfected. In fact, they used a special lathe instead of removing metal using a hammer and chisel.

The Penningtons' peal of bells had been hung in plain brass bearings. By 1970, these had worn out and had to be replaced by ball bearings as the peal had become difficult to ring. The work was carried out by Arthur Fidler, a former employee of the legendary Whitechapel Bell Company. Whitechapel features again in 2010, when the company was contracted to carry out a complete refurbishment and rehanging of the peal.